The Deanna Protocol Hope for ALS and Other Neurological Conditions

The Deanna Protocol: Hope for ALS and Other Neurological Conditions is a book written by Dr. Vincent Tedone, who developed the Deanna Protocol Metabolic Plan for ALS (also known as the DP Plan), and his two daughters Deanna Tedone-Gage and Chiara Tedone. The book contains two sections that explore very different aspects of the DP Plan. One section follows Dr. Tedone, Deanna, and their family on an emotional journey as they cope with Deanna’s life changing ALS diagnosis and their search for a cure for ALS. They discover that no cure for ALS exists and developed the DP Plan, a metabolic program that saved Deanna’s life. the DP Plan is not an ALS treatment or ALS cure but rather a metabolic program responsible for keeping Deanna alive! The other section provides detailed scientific information on how Dr. Tedone searched for an ALS treatment or ALS therapy. He was looking for a cure for ALS and developed the DP Plan that exists today. The book is currently available in paperback, hardcover, and e-book format. 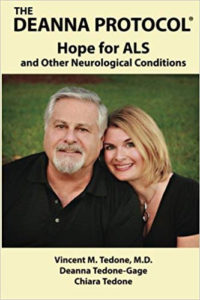 More About the Book

Deanna was diagnosed with ALS and told that she should get her affairs in order and enjoy what little time she had left. As a successful attorney, practicing in a law firm in Tampa, it was hard to imagine how her life was about to change. The rapid progression of ALS robbed her of independence and her profession. Deanna’s courageous decision to fight ALS met with failure after failure before the discovery of the DP Plan, which has slowed the progression of her disease and has given her hope. The countless hours spent by Dr. Vince Tedone in a desperate search against time eventually led to the discovery of metabolic support that the authors believe gives Deanna’s motor neurons the energy needed to survive and reduces excitotoxicity caused by excess glutamate, a shortage of GABA or both.

Nobody at Winning the Fight, Inc. stands to gain anything from the success of the DP Plan, which recommends a combination of supplements available commercially from a variety of suppliers in amounts that are considered safe for human consumption. The proceeds from this book are going to Winning the Fight, Inc. to support outreach to patients with ALS, research, clinical trials and development of improvements in the DP Plan.

How to Access the DPTM Plan: Our Neuro-Health Protocol for ALS

If you are interested in taking the DP Plan, or asking Dr. Tedone questions/joining discussions in our forum, please register here to access the DP Plan and join our online community. If you are a PALS or person with other neurodegenerative condition, we ask that you click here to take the ALSFRS after registering, this short survey will allow you to identify the progression of your disease before you start the program and track your progress while on the DP Plan.